Buddy, a 1 year old, 42 lb. German Shepherd/Terrier mix, is a real gem. He is intelligent, eager to please, and a quick learner. With his most striking eyes, he looks into yours with a soulful gaze and cocks his head to listen. Full of personality, he is enthusiastic and funny as he dances around excitedly when hearing the voices of his humans. Buddy loves playing with his siblings, and when he sees the other dogs in his foster home, his tail starts wagging and he gets so excited and happy. He always greets them with the sweetest kisses and will cuddle up with them for a nap as well! He does not need a canine companion in his forever home though. This agile boy would excel at agility training, but he doesn’t need to do that.

Buddy enjoys water play and bouncing around carrying big toys. Sometimes he even climbs into his toy box to find the one he wants and then joyfully launches onto his bed or the couch with them. Buddy is just hilarious to watch and loves standing between his foster parents’ feet and mouthing with his canine buddies from his protected spot. A very loyal boy, he likes being near his people and crashing for a nap at their feet, in their laps, or next to them on the couch. He is the most delicious snuggler and has infinite amounts of love for his family of humans. Sometimes he will just come to his people and ask for a quick cuddle before resuming his play.

Buddy is housetrained, knows basic commands, walks well on a leash, and sleeps through the night like an angel. With strangers and new things, he is much more cautious and needs slow acclimation, so he would prefer a home with children over 8 years old.

Buddy has Megaesophagus, (where one part of his esophagus has a little difficulty carrying food to the stomach) which has been well managed for several months on medication that is approximately $20 per month. He happily sits and waits when it’s medication time which he will likely need for life. However, one should not mistake this for lack of normal behavior, for this guy truly lives life to the fullest. 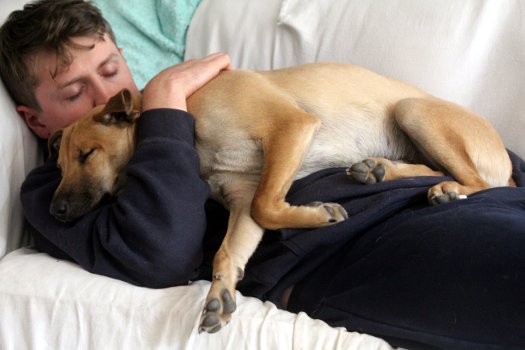