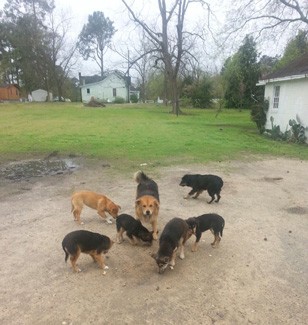 Since March, A New Chance has been working on trapping approximately 10 to 15 street dogs in a rural SC town with no animal control officer (read below). They are all very sweet, but are timid because the neighborhood kids throw rocks at them. These dogs so deserve their new chance! If you can help sponsor their extensive veterinary needs, please make a donation.

Back in March of this year, Tonya Brown published a news story about an elderly woman, Mrs. Cooper, in Clio, SC who felt trapped in her home by all the stray dogs in her front yard. Marlboro County has been without an animal control officer to pick up strays for a couple of years now (the county does pick up vicious or attacking animals).

The President of our Humane Society, Jennifer Hyduke, visited Mrs. Cooper to evaluate the situation and see what the Humane Society of Marlboro County could do to help. The dogs and puppies on and near the property did indeed appear stray, hungry and not cared for although one neighbor claimed that one of the dogs was his. We had very little available space at our shelter and knew we were not equipped to deal with these very, very shy, unsocialized dogs who had likely never known a kind hand.

We reached out to A New Chance Animal Rescue from Bedford Hills, NY. We showed them the news story and explained the situation to see if they could help. They were horrified to read the commenters under the new story on CarolinaLive.com suggesting that the dogs be shot or poisoned with several people offering to come do just that!

Sophia from A New Chance Animal Rescue immediately called fellow rescuer Maureen who lives in NC and works closely with her to save so many lives. Maureen has a great talent in working with unsocialized and shy animals and agreed to help, driving down to meet with Jennifer and the Mayor of Clio. Since then, Maureen has traveled to Mrs. Cooper’s home in Clio, SC and captured several of the dogs and is rehabilitating them before sending them on to Sophia and ANCAR in NY to find new homes and new lives as valued pets. She will be returning over the next couple of weeks to trap more of the dogs still left there around Mrs. Cooper’s home. 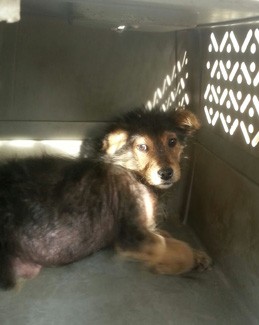 As you can imagine, these poor animals were all in very poor health – starved, full of parasites, covered in fleas and ticks, injuries, some almost bald from severe mange and heartworm positive. Maureen and A New Chance Animal Rescue are treating all their medical issues, will spay and neuter them, vaccinate them and treat them for heartworms which is all very, very expensive. Heartworm treatment alone is on average $350 per dog! That’s not counting all the weeks and months it takes to socialize them, transport these dogs and get them adopted into loving homes.

A New Chance needs our help to cover the costs of caring for our Marlboro County dogs. The only way we will ever get a handle on the animal overpopulation in Marlboro County is by our residents becoming responsible pet owners and making sure their pets are spayed and neutered! We are working on trying to get a mobile spay/neuter clinic to the area to help in this daunting task.”