Scout is on the smaller side for the breed. He still runs like a puppy, but already has some grown-up skills. He instantly learned ”sit”, tidily placing his elegant paws and looking up for approval. You can almost hear him saying: “I am a VERY good boy!” He takes treats gently and has a soft touch with his paws.

This good-natured boy has the classic traits and exercise needs of this active breed, (though we have never heard him do that chatty husky howl, he is a quiet guy). Thrilled when he finds a dog playmate, he plays like a big puppy, with his long elegant legs everywhere, which can be overwhelming for an older or timid dog. He is still very much a puppy with his people interaction also, and is a bit mouthy and jumpy for small children. Very connected to people and eager to learn, he would benefit from some basic training classes.

He is quite a character. Playful Scout is convinced he can drive. If the driver seat is empty when he gets in the car, he will place himself there, eyes on the road, waiting for instruction. But when the human steps in, he will happily hop into the back and enjoy the ride. He loves leash walks and is working on learning not to pull, which is an innate tendency of his breed. Running around in the yard is his favorite thing, and he still has the occasional case of the zoomies, zipping around in circles. Very interested in all critters outdoors, Scout needs a home with a physically fenced yard and no cats or other small creatures living indoors.

Scout is a smart, loving, agile guy who looks forward to finding an active forever home. 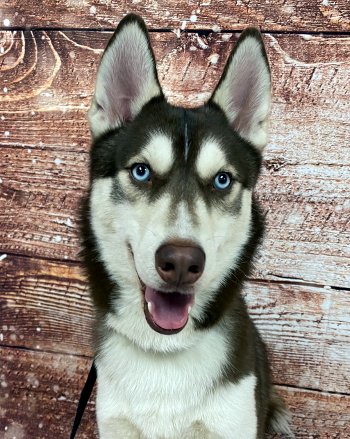