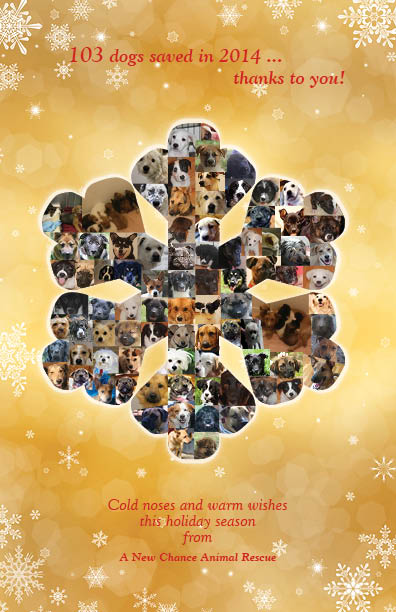 2014 has been a heartwarming year at A New Chance Animal Rescue with 103 sweet souls given their new chance. This is our best year yet and we have all of the old and new volunteers who stepped up to foster to thank for this achievement. Since we are a shelter-free organization, the correlation between the number of lives saved and the number of our foster homes is a direct one. This year some of our previous adopters have decided to “pay it forward” by caring for a new dog until the right home can be found; much as they are so joyful now with their dog, by fostering they are laying the groundwork for another family to experience that same joy.

2014 has also given us the opportunity to continue doing one of our favorite things: saving perfectly wonderful dogs that are never seen by the public and who are passed over by other rescues and adopters. This year we took many dogs, some of whom were even abandoned by their rescues after they tested positive for Heartworm;  two mother dogs who were left behind to die as other groups saved their puppies; a dog whose leg needed amputation; a puppy who was hit by a car; two dogs surrendered by a backyard breeder in such bad condition that one had to be hospitalized; and a dog who was septic even as she sat unnoticed in the shelter. These dogs are only some of the sweethearts rescued this year, and as you know, even the healthy dogs have many expenses that need to be covered. Your continued support in helping these amazing dogs is truly life changing.

2014 has also brought to light an emerging problem in the south, besides their high euthanization rates.  Both last year and again this year, it has gotten extremely cold in many of the states we rescue from.  This has created a new crisis for the shelters that don’t have heat. One of our goals this winter is to also save as many dogs and puppies as we can from freezing to death, a fate much worse than humane euthanasia. With this new mission, as well as with our continued fight for life, we are thankful for the support of our volunteers, fosters, adopters, and donors.

Thank you for your continued support and good wishes. With warmest wishes to all of you, and to all of your canine and human family members, for a joyous holiday season and a Happy New Year.